How do I install an APK file on my Android device?

One of the differences between the Android operating system and Apple's iOS is that Android allows you to freely install third party apps. While apps downloaded from the Google Play store are installed automatically, app installers downloaded outside Google Play are saved as .APK files and must be installed manually.

When you download an APK file, it is automatically recognized by the Android operating system. This means you can open an APK file by simply tapping the file icon on your Android device. However, in order to install an unverified app, you may need to change the default security settings on your Android device to allow the installation of third party apps.

IMPORTANT: You should only install apps only from sources you trust.

In order to install an APK file, you must first allow your Android device to install applications from unknown sources. You can do this by following the steps below:

APK files may be downloaded from the web or saved as an email attachment. If you receive an APK file in an email and you want to install it, just click the attachment and tap Install to install the app on your tablet or smartphone. If you've downloaded an APK file from the web, you can find it in your Downloads folder (Apps & Widgets → Downloads). In the example below, the Downloads folder contains an app called Fact.apk. 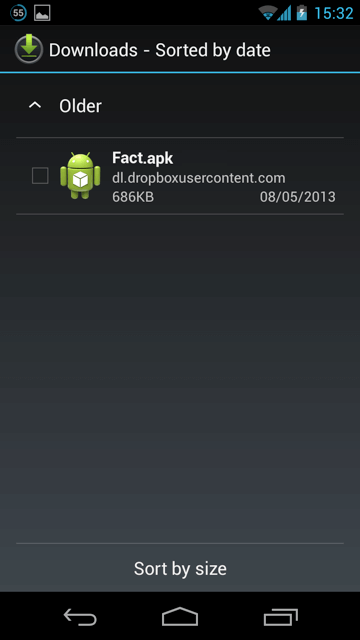 You can now access the newly installed app from your Home screen.